The main aim of the international AMADEUS collaboration is to carry out experiments to study the low-energy kaon-nucleon/nuclei interaction. To achieve this goal, the measurements are performed at the DAΦNE collider with the KLOE detector system at LNF, which could be implemented in the central region with a dedicated target. The KLOE detection setup is suited for the measurements due to the large cylindrical drift chamber allowing for excellent charged particles tracking and identification, and to the 4π electromagnetic calorimeter available for neutral particles detection. The planned series of measurements with AMADEUS will provide the first complete and high precision data set for the study of the formation and of the decay processes of the DBKNS. The collected data allow to study their characteristics, including binding energy and width. Moreover, this study provides information about one of the most importnt, yet unsolved, problems in hadron physics: hadron masses and hadron interactions in nuclear medium and the structure of the dense nuclear matter.

The DBKNS case is intensively debated by the scientific community, both by experimentalists and by the theoreticians. According to some theories the existence of very deeply bound states is possible (about 100 MeV of binding energy for the K− pp nuclei decaying to Λp) while other theories are predicting much less bound states. AMADEUS will do the first complete investigation of the Λp, Λd and Λt channels, searching for signals coming from bound states and, in the same time, exploring intensively the rich physics of these channels. AMADEUS will also perform for the first time precision measurements of the low-energy (negative) kaon-nuclei interactions, hence cross-sections determination for absorption and hyperon production and determination of the properties of the resonant state Λ(1405) produced in the stopped kaon-nuclei interaction. These measurements will provide valuable information about the non-perturbative QCD in the strangeness sector, which are not available at present.

The results from AMADEUS are expected to be unique, because of the DAΦNE low energy kaon beam with very small hadronic background, and because of the large acceptance detector system which is well suited for high precision stopped-kaon experiments. As a first step in project realization, the AMADEUS group in collaboration with KLOE2 started to analyze the KLOE data taken during 2002-2005, in the search for processes generated by the small fraction of kaons stopped in the materials of the setup, in particular in the drift chamber, containing helium. AMADEUS carried out in the end of 2012 a dedicated measurement with a carbon target situated inside the drift chamber for an advanced study on the stopped kaons processes (see figure below). Project dedicated to analysis of 2012 data, Search for Deeply Bound Kaonic Nuclear States using stopped kaons in a pure carbon target, was qualified for funding by National Science Center in frame of SONATA grant No. 2016/21/D/ST2/01155. 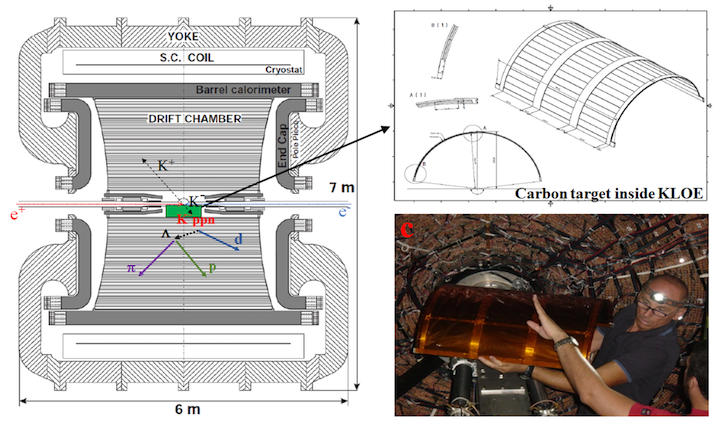