Strong interaction, one of the four fundamental interactions in the Universe, is described by quantum chromodynamics (QCD). Many aspects of QCD, especially at low energies, remain unclear due to the lack of experimental data. The SIDDHARTA-2 (under preparation) experiment have as its objective to make unique measurements at a global level on strong interaction, using particles called kaons, which consist of a quark and an antiquark (one of the two with “strangeness”), produced by the DAΦNE accelerator of the National Laboratory of Frascati. SIDDHARTA2, successor of SIDDHARTA (which made the best measurement worldwide of kaonic hydrogen), studies the formation and decay of exotic atoms, in particular of kaonic deuterium. The measurement will allow to extract, using also the SIDDHARTA kaonic hydrogen measurement result, the isospin-dependent antikaon-nucleon scattering lengths, which are quantities of fundamental importance for understanding the low energy QCD in the strangeness sector (as for example aspects of the interplay between spontaneous and explicit chiral symmetry breaking) having also important consequences for astrophysics (equation of state of neutron stars). SIDDHARTA-2 will perform precision X-ray spectroscopy of the kaonic deuterium transitions to the 1s level, which allows to measure the strong interaction induced observables, shift and width of the ground states (1s). 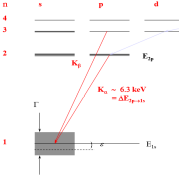