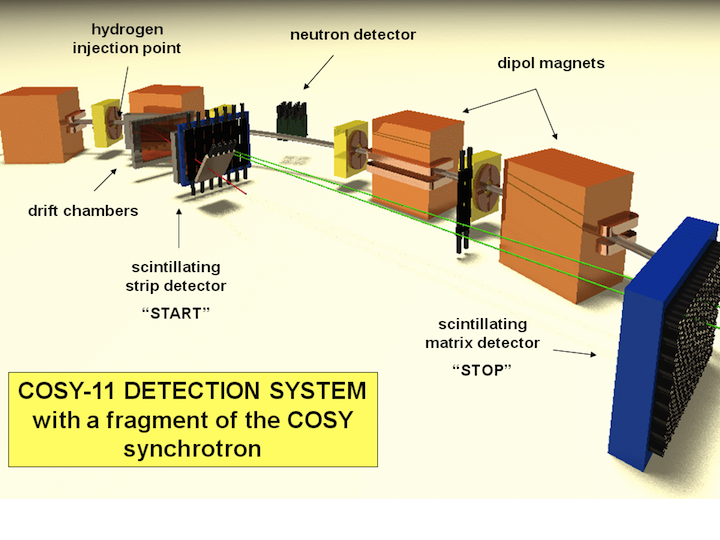 Work of our group is focused on the eta and eta-prime mesons, their interactions with protons, mechanisms of production of these mesons in collisions of nucleons, as well as studies on their structures.

The above mentioned studies are based on the measurements of the total and differential cross sections on the production of eta, eta-prime as well as K+K- mesons in the collisions of proton-proton or proton-neutron. The experiments were conducted in the Research Center Jülich (Forschungszentrum Jülich) in Germany at the COSY accelerator, with the usage of the COSY-11 detection setup. The measurements were based on the registration of signals created in the detectors by passing nucleons from the reaction, whereas the produced mesons were identified via missing mass technique.
In the figure above the COSY-11 detection system with part of the COSY ring is presented. The COSY synchrotron is located in the Research Center Jülich close to Aachen and Cologne.

The main results of Cracow group at the COSY-11 experiment are:

Most precise determination of the eta and eta-prime mesons properties.
--- "Determination of the eta'-proton scattering length in free space",
E. Czerwiński, P. Moskal, M. Silarski, S. D. Bass et al., Phys. Rev. Lett. 113 (2014) 062004
The scattering length for the eta-prime-proton potential in free space was determined for the first time. The achieved result was possible only due to unprecedented accuracy achieved by the COSY-11 experiment and the elaborated analysis methods.

---"Determination of the total width of the eta-prime meson",
E. Czerwiński, P. Moskal, D. Grzonka, R. Czyżykiewicz et al., Phys. Rev. Lett. 105 (2010) 122001
The natural width of eta-prime meson was determined directly from its mass distribution for the first time with the resolution comparable to its width. The precision of this single experiment was equal to the accuracy which Particle Data Group had previously achieved by combining 51 experiments which determined properties of the eta-prime meson only indirectly connected with its width. The result was included in The Review of Particle Physics prepared by Particle Data Group: Phys. Rev. D86 (2012) 010001.

---"Mechanism of the close-to-threshold production of the eta meson",
R. Czyżykiewicz, P. Moskal, H. –H. Adam, A. Budzanowski et al., Phys. Rev. Lett. 98 (2007) 122003
The determined angular dependence of the analysing power, combined with the isospin dependence of the total cross section for the eta meson production in nucleon-nucleon collisions, revealed a statistically significant indication that the excitation of the nucleon to the N*(1535) resonance, the process which intermediates the production of the eta meson, is predominantly due to the exchange of the pion between the colliding nucleons.

---"Eta-prime production in proton proton scattering close to threshold"
P. Moskal et al., Phys. Rev. Lett. 80 (1998) 3202-3205
The reaction has been measured at the cooler synchrotron COSY at Jülich using the internal beam and the COSY-11 facility. The total cross sections at the four different excess energies have been evaluated. In this region of excess energy the eta-prime cross sections are much lower compared to those of the pi0 and eta production.