KLOE-2 is an experiment aiming at precision studies of the physics of mesons at the energy scale of about 1 GeV, with a special emphasis on the K mesons. The KLOE-2 setup is a particle detector in whose center electrons and positrons are collided at an energy of about 1020 MeV, i.e. close to the mass of the Ф resonance. The e+ and e- beams are provided by the DAФNE accelerator located, along with KLOE-2, in the largest nuclear physics laboratory in Italy, Laboratori Nazionali di Frascati (LNF) near Rome. 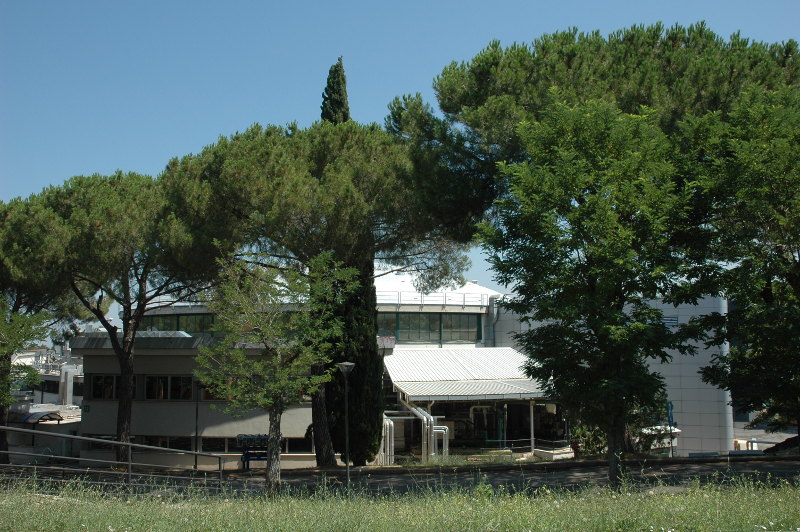 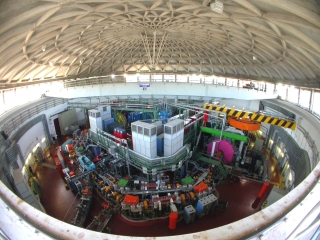 The choice of center-of-mass energy of the colliding electron and positron results in a copious production of the Ф mesons at DAФNE which, in turn, decay predominantly to pairs of either neutral or charged K mesons. Such production of meson pairs allows for obtaining pure beams of any of the K mesons, thus allowing KLOE-2 to perform precision studies of their properties such as branching fractions and lifetimes. Moreover, the system of neutral kaon pairs easily produced at KLOE-2 is perfect for testing of the fundamental discrete symmetries. The states of pairs of neutral kaons available from Ф decays exhibit quantum entanglement which allows for sophisticated interferometric measurements CP and CPT-symmetry violating parameters of the kaon system. The physics at KLOE-2, however, is not restricted to K mesons and also involves e.g. the η mesons and searches for the dark matter U boson.

The products of electron-positron collisions are recorded by the detector’s large drift chamber which tracks charged particles, as well as the electromagnetic calorimeter surrounding the chamber, in which photons and other particles leave traces of their interaction. The region closely surrounding the collision point is occupied by the inner tracker, a state-of-the-art tracking device made of four layers of cylindrical Gas Electron Multiplier detector, being the first device of this kind ever created and devised especially for KLOE-2. 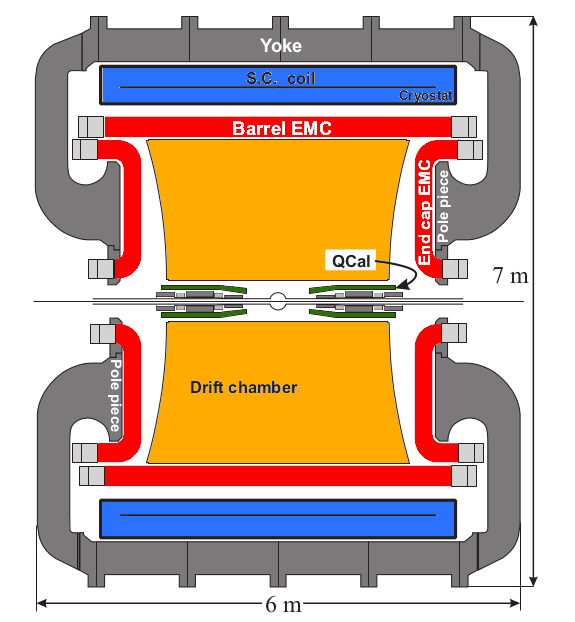 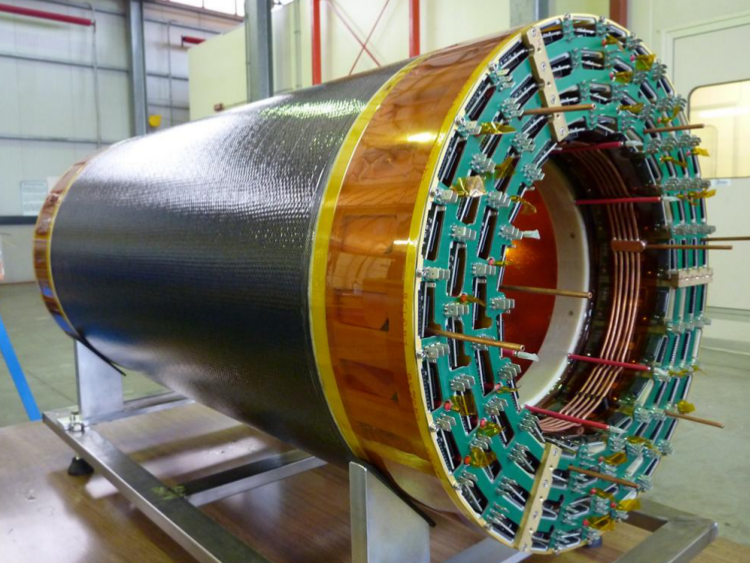 The KLOE detector has been first taking data in the years 2004-2005, collecting a sample of about 2.5 fb-1 of data which provided numerous physical results and whose many analyses are still in progress. In the past years both the DAФNE accelerator and the KLOE setup have been upgraded. and KLOE was. The detector, improved and equipped with additional subdetectors, has started its new operation in 2015 as the KLOE-2 experiment and has been taking data until 2018, collecting a sample of about 5 fb-1 which allows for exciting physics searches as well as for improving the precision of previous KLOE results and the sensitivity in searches of discrete symmetries’ violation searches. The Cracow Subgroup of the KLOE-2 Collaboration took an active part in preparation of the new KLOE-2 detectors and the data-taking campaign. Presently,the collected KLOE and KLOE-2 data is analyzed by the Cracow group members with respect to several physical studies briefly described below.

One of possible tests of the CPT symmetry is based on a comparison between charge asymmetries in semileptonic decays of the short-lived kaon (KS) and the long-lived kaon (KL).

So far this asymmetry for the KL➝πeν decay was determined with a precision more than two orders of magnitude better than for KS. The KS➝πeν decays in KLOE data sample containing about 1.7 billion KSKL events were therefore analyzed in order to determine the BR(KS➝πeν) and KS semileptonic charge asymmetry with a precision improved by about a factor 2 with respect to the previous measurements.

Studies of the K+K− interaction and scalar meson properties

K− mesons in order for an insight into the structure of scalar mesons. The e+e−→K+K−γ reaction is studied for e+e− energies close to the mass of the φ(1020) meson with an emphasis on the K+K− strong interaction amplitudes in the S−wave and at the relative energies close to the kaon–antikaon threshold. Knowledge of these amplitudes is essential for a good understanding of the structure and properties of the scalar resonances f0(980) and a0(980), which decay i.a. into kaon pairs.

Quantum entanglement of neutral K meson pairs uniquely available in the Ф meson decays at the DAФNE collider allows for testing of the T and CPT discrete symmetries using a recently proposed concept of direct tests based on a comparison of probabilities of transitions between flavour and CP-definite states of the neutral mesons with their T- and CPT-conjugate transitions. For both of the T and CPT symmetries this approach leads to a test independent of the other discrete symmetries' violation and not relying on the decay as an essential ingredient. As such tests require a comparison of rates of the Ф→KSKL→π±e∓ν3π0 and Ф→KSKL→π+π-π±e∓ν processes, event selection reconstruction and reconstruction procedures were prepared and applied to the KLOE data sample. The data analysis with a view to the first direct test of the T and CPT symmetries with entangled neutral kaons is presently finalized.
This work is supported by the NCN grant no. 2016/21/N/ST2/01727.

Quantum entanglement of the neutral K meson pairs at KLOE allows for a determination of the parameters ϵ and ϵ’ which are historically used in the description of the CP violation in K decays predicted by Standard Model. In particular the parameter ϵ’ is uniquely related to CP violation in the transition amplitude. A non-zero value of the ϵ’/ϵ ratio would be an unambiguous signal of the existence of direct CP violation. Therefore, the study of the time difference distribution for the kaon pair decays into the final states π0π0 and π+π− final states is performed. This time difference distribution exhibits and interference pattern, a fit to which can be used to extract both the Re(ϵ’/ϵ) and Im(ϵ’/ϵ) values.

In order to investigate the spatial distribution of the meson charge its decays into two photons must be studied out of which at least one is virtual, as e.g. in Dalitz or double Dalitz decays. The internal conversion of the virtual photon leads to the creation of a lepton-antilepton pair with square of the invariant mass equal to the square of the four-momentum vector of the virtual photon. Deviations of the l+l− invariant mass distributions from the QED predictions deliver information about the meson structure and the dynamics of the process. Therefore the Φ→ηe+e− Dalitz decay is studied at KLOE in order to extract its branching ratio as well as the slope of an electromagnetic transition form factor of Φ-η mesons and a charge radius of the Φ meson. Moreover, a maximum in the e+e- invariant mass mass in such a process could be a manifestation of the dark matter U boson in the process Φ→ηU→ηe+e−, thus allowing for dark matter particle searches at KLOE-2.

Work of the Cracow KLOE-2 Group is coordinated by dr Eryk Czerwiński.